We recall from last year a question that many pondered – just how far can air cooling go? Air cooling can only go so far and it won’t be long until we hit the limit. We’ve already seen some companies take to water cooling solutions with all-in-one kits – some more successful than others. It won’t be long until some of the bigger names start to find new ways to adapt air cooling for the masses and take it to a new level. There are already rumours of vapour chambers and TEC’s in the future. However, one such company that we are reviewing today has taken a step ahead of the big rivals and taken air cooling to a whole new level – liquid metal.

Many people will be unfamiliar with Danamics and wouldn’t have known they produce CPU coolers. Founded on the principle of providing manufacturers of electronic hot spots the very best in cooling, Danamics started in 2005. Since then, Danamics has worked on developing, manufacturing and commercializing their core technology, which centres around the principle of using liquid metal as a heat remover. Danamics were keen to improve on their earlier cooler; the LM10. Much hyped and talked about, it proved to be only average and couldn’t keep up with the very best standard air coolers, let alone justify such a high price tag! They redesigned the whole cooler from the ground up but have kept the same Sodium Potassium Alloy used for cooling.

Sodium Potassium Alloy (aka NaK) is a top substance for heat transfer. However, reading through the nice detailed warning booklet, it is highly reactive to air and water. Something that puts many people off due to the fact that if the substance were to leak, well, watch out for an explosion! This NaK is pumped around the cooler’s nickel plated heatpipes via the electromagnetic pump which is silent and features no moving parts. This pump is a REV.2 (PowerBooster 2) over the previous LMX Pump, which Danamics has told me is smaller, cheaper and more effective. Note – this does get very hot so be careful! Moving parts are totally eliminated as the magnetic force is created within the particles of the liquid metal causing it to flow.

See the image below for the step-by-step of how this electromagnetic flow works: 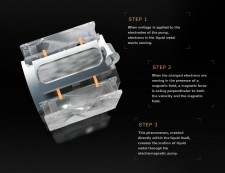