November 18, 2015, Keelung, Taiwan – Lian-Li Industrial Co. Ltd announces the PC-Q04 Mini Tower Chassis for Mini-ITX systems. While not the smallest chassis Lian Li offers, this case gives builders a bit more breathing room without compromising its compact size. The enhanced vents are designed to mitigate any vibration or noise from case fans and maximize the cooling performance of the internal components themselves. The PC-Q04 employs both its floor and roof space for drive mounting, doing away with externally facing bays for improved airflow.

One of the biggest features of the PC-Q04 is its vents – they are the only things that could be described as “big” on this case. The large side vent lets the PSU draw and vent out its own air to work as efficiently as possible. Meanwhile, the bottom left and right vents as well as the entire floor panel allow the GPU to take in air as needed while giving the CPU enough room to breath. The rear panel is another large vent to let warm air escape. Tall rubber feet prevent vibrations and suspend the case to let air flow readily through the bottom vent.

The PC-Q04 uses a familiar Lian Li vertical-mounted Mini ITX system layout. A full ATX size PSU of up to 160mm is mounted opposite the CPU, giving a full 70mm clearance for coolers. Video cards can be up to 190mm long; the case has two expansion slots with an extra margin for especially thick cards. There are two locations to mount hard drives: one 3.5” or 2.5” drive on the floor panel and two more drives, one 2.5” and one 2.5 or 3.5”, on a removable tray at the top. The floor can instead be used for a 120/140mm fan if necessary. There is only the power button, two USB 3.0 ports, and HD audio ports on the front panel. On the back panel are the usual two expansion slots, PSU and motherboard cut outs, and the large vent. No fans at all. 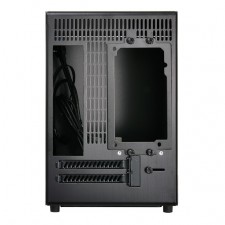 Compared with other Q series cases, the PC-Q04 adds extra volume near the top and bottom panels, instead employing spacious vents to preclude the need for cooling fans. The PSU cycles its own airflow without affecting other components. The GPU similarly can pull air directly from the bottom and side intakes and vent directly from its fan. The CPU is more sheltered and requires a smaller cooler. It vents through the oversized back panel as air will naturally flow that way.

The PC-Q04 will be available in early December at Overclockers UK for £44.90.

At least it will be fanless until the modders get their hands on it.